The Law Firm of Aiello Harris congratulates attorney Timothy
Broking on being named Top 40 Under 40 Attorneys by the National Trial Lawyers Association for the second year in a row.  Mr. Broking was recently named partner in June 2014 and has been with the firm since 2006. In the first half of calendar year 2015, Mr. Broking has settled nearly $750,000 in personal injury and workers compensation settlements consisting of settlements in the amount of $110,000, $230,000 and $325,000 along with many others.

Visit Timothy Broking’s profile to read up on his bio and/or to contact him at the firm.

If you or someone you know requires legal assistance, contact our firm 24 hours a day, 7 days a week at 908-561-5577.  Our
attorneys are made up of certified civil trial attorneys and former prosecutors.  The law firm of Aiello Harris maintains several offices through North and Central New Jersey including offices in Bergen County, Essex County, Morris County, Somerset County and Middlesex County. 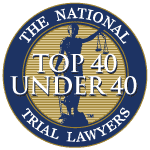